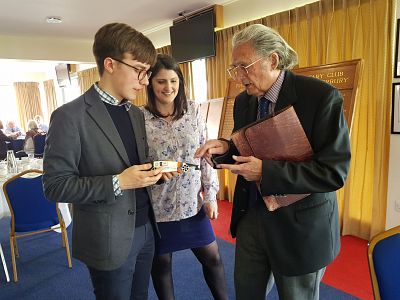 It’s always very invigorating to hear youngsters talk with passion and enthusiasm, and that’s what it was like when George Stonor, from Queen Elizabeth’s Grammar School (QEGS) in Faversham, came to talk to us about F1 in Schools.

The “F1 in Schools” engineering competition is a global competition involving more than 20 million students in over 44 countries that aims to help “change the perceptions of science, technology, engineering and maths [STEM] by creating a fun and exciting learning environment for young people.”

Our Club first got involved when working on our Annual Innovation Competition – a student from Queen Elizabeth’s Grammar School had approached us to inspect their work. Since then we’ve helped sponsor the School’s teams and have helped them prepare their presentations. This year we were delighted to learn that the team became English Champions in the 2019 National Finals and has been selected to go forward to the World Finals in the autumn in Abu Dhabi.

George came along to speak to us together with his design and technology teacher, Bethany Butterworth. The school’s team this year consists of George (now Team Principal) and his colleagues Lewis Fowler (Design Engineer) and Freddie Bull (Manufacturing Engineer). George is the most experienced member of the team, having been involved for four years. The team, founded by George and Lewis, is called ‘Evolve’ – a name that the youngsters came up with because they feel they are helping to “evolve a future generation of engineers”.

The main challenge for teams is to design, create and test a model racing car using computer-aided design (CAD) that can travel at speed down a twenty-metre track. Powered by a CO2 gas cylinder, the cars move so fast they cover the track length in just over 1 second. But the challenge involves much more than just making and testing the car – the youngsters also have to raise their own sponsorship, create a brand, pit display and produce and distribute publicity materials. Racing only counts towards a quarter of the marks.

The project is something that the youngsters have to give up their spare time for – they work on it at lunchtimes, leading and managing the project themselves. Not only do those taking part improve their STEM skills, they also improve their presentation and communications skills – all very important in this day and age. In addition, they learn to work with professionals and industry to raise sponsorship and enhance their own knowledge and abilities.

The rules and regulations of the competition dictate what teams need to do. The car itself is around 20 cm long and must comply with “hundreds” of regulations. The pit display is worth 60 points and must include multimedia. As part of publicity the youngsters also have to develop their own social media campaign – they have Facebook, Twitter and Instagram accounts. We were impressed to see their fantastic promotional film.

This year the team’s car consists of two main parts – a central white monocoque or “body” and additional components including wheels and aerofoils; this division gives greater flexibility for testing designs. While the main body of the car stays the same, the other parts of the car can be made using 3D printing. This allows various design ideas to be tested with relative ease and a quick turnover time. Over the last year the QEGS team have developed 5 full prototypes and this year they tested about 20 variables with 4-5 designs per variable. They would like to try more, but have limited R&D resources.

This final body of this year's car was made to their design by a manufacturer on the Isle of Sheppey. It’s covered in PTFE (the substance used to coat frying pans) to reduce friction. As would be expected for a F1 car, it’s covered in sponsor’s logos.

During the competition F1 in schools provide the CO2 cannisters, which are kept in the fridge and weighed before use so that all teams have the same amount of gas. The teams are allowed multiple runs. Unlike F1 races, their cars are only tested on a straight track – they don’t have to go around corners. So, if anything, they are designed with a slight bit of lift. But the car does have to stop within 1 metre and stay intact. Sometimes cars can break up (it’s happened to them) so they need to build strong cars and have quality control processes in place, especially for outsourced items. Surprisingly, the cars don’t have to stay upright. It’s also important for the team to have good reaction times - Mrs Butterworth interjected at this point to tell us that George was really quick. George passed the car and publicity materials around the rooms for members to inspect. They were of course delighted to note the Rotary branding!

QEGS first got involved with the competition in 2016 – that year they managed to reach the Regional Finals. Their ongoing success has spurred them on – and it seems that the project has now captured the imagination of the whole school.

In February they became the Regional Champions for London & the South East before going on to become English Champions and come second in the National Finals held in Wales later in the year. The event was livestreamed on YouTube and the team were even interviewed by a Radio 1 presenter. George told us that they had a really exciting time and described the incredible atmosphere at the event.

What’s particularly remarkable about the QEGS team is that, as their name suggests, they also have an ‘ethos’ outside the competition to help evolve a future generation of engineers. As such, they’ve started to give talks to local primary schools and are working on an initiative to get these youngsters involved. They’ve also participated in events to encourage girls into engineering and have gone to Trafalgar Square, for the F1 Live event, to speak to members of the public. George and his team are also working with a design and technology association – there they were interviewed about the competition, track and testing. This encouraged even more youngsters to get involved with Design & Technology at school.

The school has its own test track (which our members have seen in action several times now) – this cost them £1,000. Because it’s only used periodically over the year, the youngsters (who are in years 12 & 13 and aged 17-18 years) have developed a year 7 project (for children aged 11-12 years) so that they get to use it too. This gets the younger students engaged with the competition and lets them have some fun as they progress through the school.

The team is grateful for a range of support from the local community and others. This support includes: advice; manufacturing services; networking and financial aid. Our Club has provided both financial support and has supported the team in practising their presentation skills. Team Evolve has also received support from the Rotary Club of Faversham. The team is always on the lookout for further support (see below for contact details). The next challenge for team Evolve are the World Finals. For this they need to raise over £15,000 – so they are approaching local and national companies for that support. This money is needed for: car development, pit display and materials, team uniforms and transport. In addition, they are hoping to raise funds to support their Primary School initiative. Manufacturing services that the team needs include: 3D printing, machinery and clothing.

On being asked how she feels about her students, Mrs Butterworth said: “It’s been amazing to see the change in the team members during the competition. One of them was a nervous wreck before the competition, but it was lovely to see the youngster bursting with confidence after”. And when asked how she felt on their success, she said: “I cried my eyes out when they got through!”

At the end of the talk, George asked for questions from the floors, of which there were plenty about the car, its design, the competition and the team’s need for support. Rtn, Robert Temple, a former automobile engineer, stated: “I was very impressed with today’s presentation and congratulate all the youngsters”. After the talk he stayed behind to discuss design details with George.

If you or your company is interested in sponsoring this remarkable team, you can learn more about them through their social media accounts:

Email the team at: evolve.f1inschools@gmail.com

Picture: George and Bethany talk to Rtn Robert Temple about the latest car design from Team Evolve. Picture credit: Rotary Club of Canterbury. Futher pictures can be seen on our Facebook page.