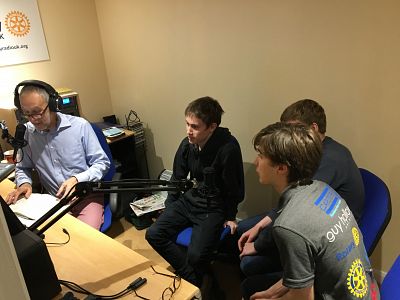 Helping others isn't always just about making donations. Our Rotary Club prides itself on "using business & social skills for good in the community". Sometimes that means giving our time, sometimes it involves making the best use of our networks.

When student George Stonor from Queen Elizabeth's Grammar School in Faversham came in with his teacher some weeks ago to talk about the school's partcipation is the F1 in Schools competition we were left very impressed. Not only had he and his Team mocked up a super little CO2-powered model car and done a great job of developing promotional materials, they'd come top in England and 2nd in the National Finals and are now targetting the International Finals in Abu Dhabi. More impressive perhaps was the Team's desire to leave a legacy for the youngsters that may follow in their footsteps - the Team is getting younger students interested in the competition, and they are also going out into the community to encourage youngsters like themselves into STEM subjects (Science Technology Engineering Maths). This is what the country needs if we are to produce the scientists and innovators of the future.

Our Club had already given the School some sponsorship (along with the Rotary Club of Faversham) and some of our members had helped the Team to prepare their presentation and practice their communications skills. But perhaps there was more we could do to help them achieve their goals? The youngsters need to get the message out there in order to get the sponsorship and backing that they need to continue to compete. So one obvious thought was to introduce the team to Rotary Radio UK - the digital radio station based in Bluetown, Sheppey. Rotary Radio UK is not just a great station to listen to, it promotes Rotary and Rotary-backed projects on its radio programmes - currently it has listeners from over 106 countries across the world.

So that is exactly what we did, and on Wednesday the team of three school boys, accompanied by their Head of Faculty, Phil Harvey, were interviewed live on Rotary Radio UK's "Steve Wood Show". It was "a great experience" for the youngsters to talk about Team Evolve and F1 in Schools. Freddie Bull, Lewis Fowler and George also had the chance to learn about Rotary Radio UK and how running a radio show works.

Steve, CEO of Rotary Radio UK, was also impressed by the youngters. "We wish them well with the project and their future careers," he said, adding. "We look forward to seeing them again after the international competition, hopefully brandishing the trophies!"

Steve also had praise for the teachers that support the project and Team - "I know part of [Evolve's] success is due to a dedicated team of teachers, so thank you for the part you have played in their achievements." Steve added that Rotary Radio UK would be very pleased to maintain and build [the] relationship with [QEGS] school.

We too are thankful to teachers Phil, Bethany Butterworth and others at the school and to Rotary Radio on taking up our suggestion for an interview.

It's with some delight that we report that the boys told us: "We are doing very well in our preparations and we are very excited that exams are over and the new rules and regulations have come out so we can start the serious development of our car."

We also wish them well in their endeavours and look foward to updates which we will share with readers.

You can listen to the interview from Rotary Radio UK here.